The following is the full report:
A. Research conclusions:
Consumer attention is always scarce. 90% of readers are concerned about less than 50 self-media.
78.3% of readers have high frequency attention/top placement from less than 5 media.
More than 60% of netizens pay more attention to original content.
The circle of friends is the first channel for readers to pay attention to the public number.
Nearly 20% of readers believe that the public number is the preferred channel for obtaining information.

The content is flooding, and consumers' attention is limited. In terms of quantity, netizens who care about 10-50 public numbers accounted for the most, accounting for 46.6%, followed by those who paid attention to 10 or less, accounting for 43%. Only 10% of those who pay attention to more than 50 public numbers.
Nearly 80% of the users have high-frequency attention or overhead public number no more than 5. In addition, among those who are concerned about 50 public numbers, the proportion of monthly income higher than 8,000 yuan is significantly higher than that of monthly income less than 8,000 yuan.
The large amount of information added daily from the media, combined with the fragmented information consumption patterns of consumers, makes reading more random and less sticky. Not only the information of many public numbers that have been concerned may not be opened for reading, but the probability of opening each page, the probability of opening each article, and the probability of actually reading an entire article are successively decreasing.
After the public launches the "overhead" feature, users who use this feature will be more likely to focus on browsing the information of the top public number. In short, the attention of consumers is always scarce. 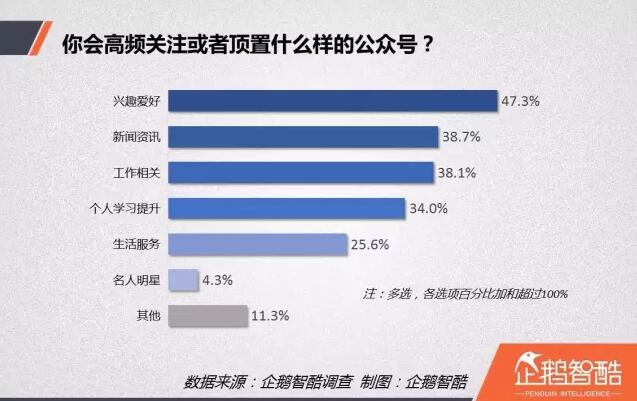 Something different from expectations, we found that readers have the highest number of high-frequency concerns/overhead hobbies, nearly half of the public. Secondly, news information, work related and personal promotion accounted for more than 30%. 25.6% of readers pay attention to the high frequency / top life service public number. The celebrity star category only accounts for 4.3%.
This shows that the segmentation of hobbies is most popular among readers. The just-needed and â€œutilitarianâ€ information such as news and other time-sensitive content and work-related, personal promotion is also the content that readers are willing to obtain at high frequency in WeChat.

D. Don't ignore the power of originality
The survey found that 65.8% of the readers are more concerned with original content, and those with higher education are more concerned about originality. WeChat public platform and other continuous improvement of original and complaint mechanisms to provide an excellent environment for original authors.
Among the top 500 WeChat public account numbers in the 2015 ranking, 33% of the public numbers have opened the original logo. Portals and traffic platforms that have spawned an olive branch from the media have also mentioned the emphasis on original content in the incentives. The preference of the big environment is in favor of the readers. Whether it is rewarding or trying to pay for reading, the original value has a lot of space to explore. 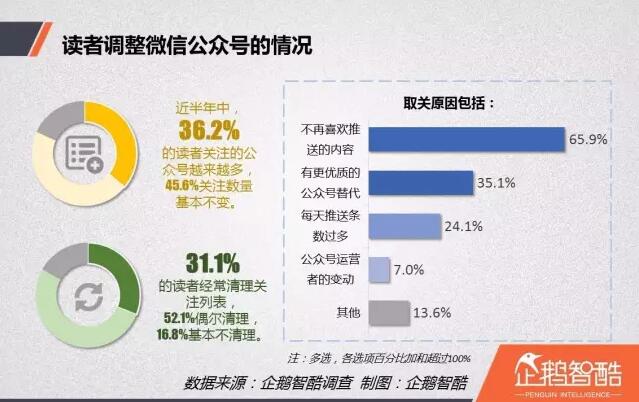 Paying more attention to the public number is the trend - in the Penguin Zhikuo survey, 36.2% of readers believe that the public number of attention in the past six months is increasing, and the proportion exceeds the decrease. From the reader's adjustment of the behavior of the public number of attention, 30% of readers often clean up the list of concerns, and 52.1% occasionally clean up. Clearing the behavior of the watchlist may make the reader more aware of something that is not frequently opened.
Letâ€™s take a look at the reasons for the cancellation of attention. â€œNo longer like to push contentâ€ is the primary reason, accounting for 65.9%. There may be many reasons for "no longer like to push content." It may be that the shift in reader preference may also be a change in the content of the public account itself.
Secondly, there is a better quality public account (35.1%). The number of public accounts has exceeded 15 million. Although the vertical number of public numbers is increasing, the homogenization of many areas is still serious. This means that some readers, especially relatively professional readers, will screen out better public numbers from time to time to maximize reading efficiency.
Because of the excessive number of pushes per day and the 24.1% of readers who canceled their attention, for them, too many pushes per day are a kind of interruption. The new list of studies found that during the weekend, the activity of the public account decreased, and the amount of push decreased, while the average content per article increased by 710 readings. Is it more important to use the number of pushes to increase the overall reading or to focus on less and better push, which is a problem that the public operator needs to seriously consider.
7% of readers pay more attention to the consistency of the public number style or care about specific operators, and will be removed due to changes in the operator of the public number.

F. How far is the public number from consumption?

F1. The potential of the community cannot be ignored, and the penetration rate of reward articles in consumer behavior is the highest. 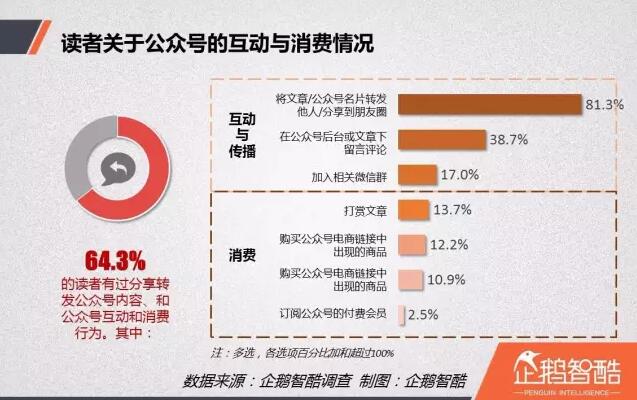 Among the readers of the public, 64.3% have shared, forwarded, interacted and consumed behaviors. These active readers like interactive reading, they actively feedback the reading experience, and contribute to the article reaching more audiences. The remaining 35.7% of the readers are â€œpassive readersâ€ who only contribute to the readings and do not disseminate the content twice, nor do they consume.
By segmenting the behavior of active readers, the penetration rate of interaction and communication behavior is significantly higher than that of consumer behavior. The penetration rate of forwarded articles was the highest, reaching 81.3%, and the commentary was 38.7%. 17% of readers will join the WeChat group related to the public number, which is higher than expected. This reflects the deep participation of some readers, and it also means that relying on social application WeChat, media operators can build a fan community, further increase the reader's stickiness and clear readers' needs, and achieve the goal of precision marketing. In addition, effective activation of passive readers will also bring more benefits to the public account.
The penetration rate of consumption is lower than that of interaction and communication, and the reward article accounts for 13.7%. Interestingly, readers who buy items in the public account have a slightly higher ratio of items that appear in the e-commerce link. The lowest percentage of readers who subscribe to public paying members is 2.5%.

F2. Public interest channel - the circle of friends is the first channel to pay attention to the public number 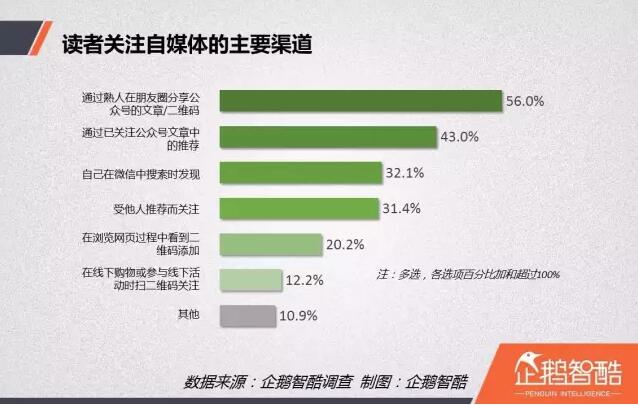 The circle of friends is the first channel to pay attention to the public number, and 56% of readers pay attention to it in this way. The content of the circle of friends can be seen as a familiar population recommendation mechanism, an intangible recommendation, and readers will instinctively pay more attention to the content of acquaintances.
The drainage effect of other public numbers in the public article is also very obvious, and 43% of readers pay attention to the new number in this way. 32.1% of readers will add a new public number when searching on WeChat, which is nearly 10% higher than the percentage added when searching on a web page. In contrast, the effect of offline attention is more general, accounting for 12.2%.
It can be seen that the public operator weakly encourages readers to actively share and effectively use the large traffic to drain themselves, often achieving twice the result with half the effort.

G. Finally, let's see how important the public number is to readers. 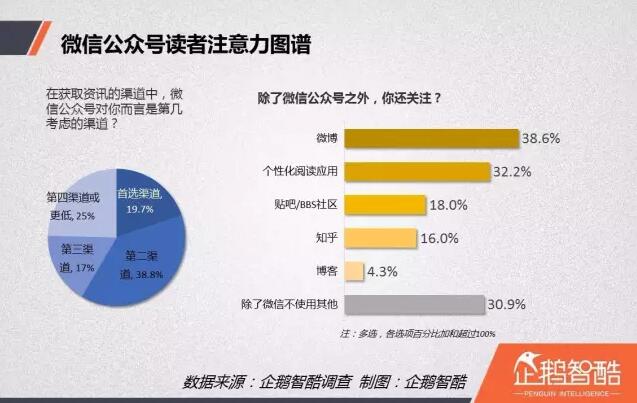 When asked about the channel of consideration in the access to information, nearly 20% of readers believe that it is the preferred channel, 38.8% think it is the second channel, and 17% think it is the third channel. As the mobile social application with the largest number of users in China, WeChat's traffic portal can be said to be the "combat place for the military" from the media. The development of the WeChat public platform has also made this application unintentionally an important information application for Chinese mobile Internet users.
30.9% of respondents did not use other social media applications except WeChat. More than 30% of readers of WeChat public account also use personalized reading information such as Weibo and today's headlines. Both the establishment and the media are mutually reinforcing. With the scarcity of consumers, media socialization may bring new business opportunities to media operators.

H. Summary: Some inspirations from the operation of the media
1. Under the premise of providing high-quality content in the same field, increase the proportion of original articles and the number of streamlined pushes. Readers who help with attention deficit and fragmented reading do subtractions.

2, according to their own positioning, multi-channel efficient drainage. Encourage readers to actively share articles but don't often kidnap readers to do this (for example, be sure to share a circle of friends and get enough praises and screenshots to get some resources). Active sharing of premium content coupled with readers' comments is the best advertising.

3. Grasp the community operations. Both social and media promote each other. Whether it is to share information, preferential purposes or to land as an offline activity, the media can form a community based on its own attributes to form a â€œfanâ€, creating a highly viscous â€œfan economyâ€ and forming synergies with the media.

4. Evaluate the possibility of content payment. Although the overall consumption driven by the media is not high, it has great potential. Rich content also means that quality content is always relatively scarce. The WeChat public account has become the first choice or the second information acquisition channel for nearly six adults. The social function public number based on WeChat has the potential to become a channel for consumers to obtain more resources and more value. Paying for content from the media can be seen as an on-demand information/resource customization service.

Caution: Always test-fasten with the lowest power level for your tool. If more power is necessary, use the next highest power level until proper level and fastening is achieved. Refer to operator's manual for more specific details. Observe all safety reminders. Tool operators must be trained and qualified as required by the national law. Failure to use properly can result in serious injury or death to users or bystanders.

Power level is designated by the load level number marked on each box; also by the color of the box and each powder load. As the number increases, the power level increases.