Abstract Graphene, as an advanced carbon material, is the world's thinnest, least resistive and hardest nanomaterial discovered in the world. It is known as "a magical material for changing the 21st century." On July 28th, Shandong Shengquan Group Biomass Graphene Inner Warm Fiber... 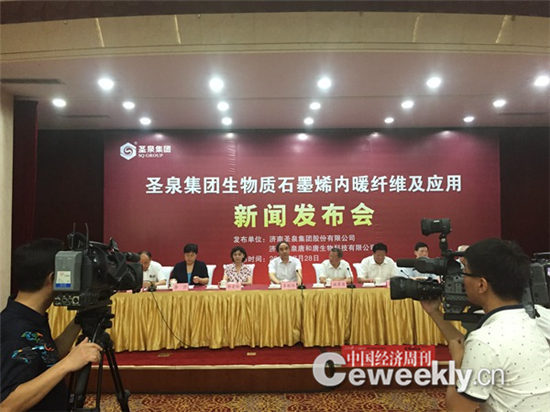 As an advanced carbon material, graphene is the world's thinnest, least resistive and hardest nanomaterial discovered in the world. It is known as "a magical material for changing the 21st century." On July 28th, Shandong Shengquan Group's press conference on biomass graphene internal heating fiber and application was held in the Energy Building of Shandong Building. Shandong Sanquan Group teamed up with many high-tech institutes to develop graphene internal heating fiber technology. Identification. Vice Chairman of the 12th National People's Congress Financial and Economic Committee, Vice Chairman of the Central Committee of the Democratic National Construction Association, Mr. Yan Shengzu, Special Research Fellow of the State Council Counselor's Office, Yao Jingyuan, Chief Economist of the National Bureau of Statistics, Su Shuwei, Member of the Standing Committee of the Jinan Municipal Committee, Deputy Mayor of the Jinan Municipal Committee, Secretary of the Zhangqiu Municipal Committee Jiang Lin and other leaders attended the meeting. At the meeting, Shandong Shengquan Group signed a strategic cooperation agreement with British Tycoman and Qingdao Xueda Group Co., Ltd. Yao Mu, academician of the Chinese Academy of Engineering, said after the appraisal meeting that the graphene internal heating fiber launched by Shengquan Group has intelligent multi-functional characteristics such as low-temperature far-infrared, antibacterial and antibacterial, anti-static, etc. A new industrial economic growth pole in Shandong Province. 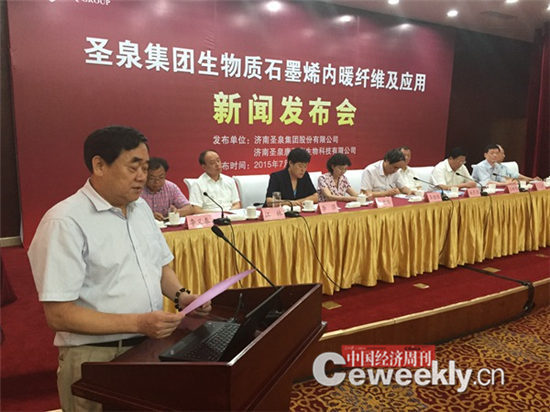 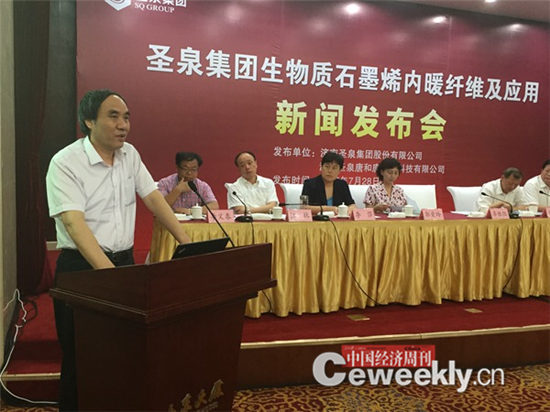 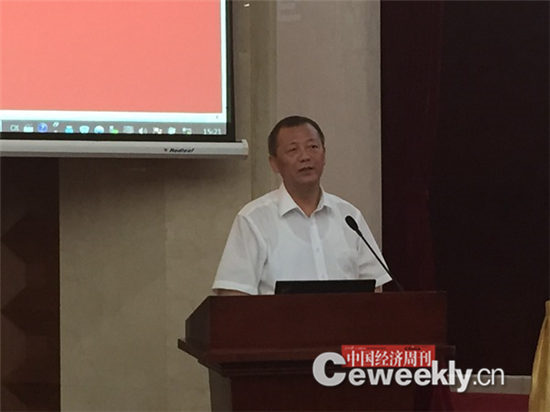 Speech by Yao Jingyuan, Special Research Fellow of the State Council Counselor and Chief Economist of the National Bureau of Statistics
It is understood that since the discovery of graphene in 2004, the heat of research at home and abroad has not been reduced, but it has been facing two key issues of how to solve the large-area, high-quality graphene preparation and rapid and efficient transfer, especially the large graphene. Area applications have always been a worldwide problem.

Since 2008, Shengquan Group has been committed to the research of this subject, from the establishment of the first laboratory with Shandong University, to the cooperation of many industry and institute experts at home and abroad, with more than 300 researchers for 7 years. Unremitting efforts in the night and night, finally breaking into a butterfly, creative production of raw material graphene from plant straw, and the use of graphene for textile fiber to achieve industrialized production, occupying a new highland of global graphene production and application technology. This will have a series of significant impacts on many industries such as chemical fiber, textiles and clothing in China.

Difficult to explore graphene as an advanced carbon material, it is the world's thinnest, least resistive but also the hardest nanomaterial discovered today. It is known as â€œthe magical material for changing the 21st centuryâ€. The European Commission has announced the use of graphene. Joining the â€œFuture Emerging Flagship Technology Projectâ€ will invest 1 billion Euros in the next 10 years. Graphene has already caused an uproar in the domestic and international capital markets. Experts in the economics and science and technology circles generally believe that graphene is a revolutionary new material, which is widely used and has great development prospects.

China has become one of the countries with the most active research and application development of graphene. However, the technology is still in the cultivation stage, and the downstream products and market development are insufficient. Due to the high cost of preparation, most of the graphene technology is still in the research stage. The entire industrial chain has not yet achieved dredge and integration, and from the aspects of graphene preparation technology to transfer technology and the opening of downstream applications, further breakthroughs are urgently needed.

In recent years, Shengquan Group has joined the exploration of graphene research and application, and with its good corporate strength to end the situation of China's graphene industrialization path is not smooth, and has embarked on a difficult exploration and innovation development of biomass graphene. .

In the previous section, Shengquan Group tried to add graphene to the resin in order to increase the high temperature resistance of the refractory material. At the same time, it tried to add graphene to the rubber to enhance the wear resistance. Although the trials have been successful, further developments are needed due to the disproportionate increase in the price and performance of graphene.

Shengquan Group finally turned its attention to the relatively complete industrial chain within the group. Shengquan Group is an enterprise group that uses crop straw as raw material. In the past 30 years, it has been committed to using corn cob to produce furfural and deep processing furan resin, realizing the cellulose, hemicellulose and lignin of plant straw. All of the major components are effectively utilized, producing a series of new materials that have a huge impact on many industries and people's healthy lives in China.

For cellulose, hemicellulose, and lignin as by-products, the Shengquan Group has also had the idea of â€‹â€‹using it for spinning or papermaking. â€œAfter realizing the breakthrough in the industrial production of graphene, we suddenly opened up our minds: using graphene on cellulose, producing functional fibers, or finding a more valuable use for graphene.â€ Tang Yilin told reporter.

Liu Yunming "We never thought that there was such a magical change after the fiber was added to graphene!" Academician Yao Mu told the reporter.

Academician Yao Mu has long been engaged in research and teaching in related fields such as textile materials science. He proposed a new research field based on the characteristics of Chinese human skin sensory nervous system and comprehensive theory, which laid a theoretical foundation for the development of special functional clothing.

"In 1998, 830,000 military personnel participated in flood fighting and rescue, and 730,000 people were rescued from the water. In the summary report to the central government afterwards, 83% of the soldiers in the rescue team were smashed, and 73% of the people suffered from smashing of the femoral sulcus. The leader was shocked and ordered to solve the problem with all efforts. After the effort, the situation was alleviated. The Shengquan Group's biomass graphene garment has excellent performances such as antibacterial and antibacterial, low temperature and far infrared, which can make the bacteria no longer multiply and eventually disappear, and at the same time Infrared function has obvious effect on accelerating microcirculation and ensuring skin health. Its advent has truly solved this problem." Tang Yilin said.

The graphene inner warm fiber filament and short fiber produced by Shengquan Group are complete in specifications. The staple fiber can be blended with other kinds of fibers such as modal, viscose, cotton and common acrylic fiber. The filament can be interwoven with various fibers to prepare different. Yarn fabric for functional requirements. In the textile field, it can be made into underwear, underwear, outerwear, hosiery, baby clothing, home fabrics, outdoor jackets, and the like.

Future prospects "Intelligent" apparel is the development trend of the textile and apparel industry in recent years. Relying on the thermal conductivity of biomass graphene heating fibers, Shengquan Group will launch an intelligent bra to measure the slight changes in the temperature of the female chest through a built-in sensor to determine whether there is a suspicious mass. Effective prevention of cancer and breast cancer will save the lives of thousands of breast cancer patients.

In addition, Tang Yilin said that the company plans to apply biomass graphene to military uniforms. This intelligent multi-functional clothing can make soldiers bid farewell to bloated cold-proof clothing in winter; it can be used in ordinary warm clothing to make beauty lovers enjoy in winter. Experience with both grace and temperature. At the same time, according to the reporter, Shengquan Group also intends to explore in many aspects such as weight loss clothing.

It is understood that China's graphene industry is currently facing many bottlenecks. First, most of the patented technology is still in the scientific research stage. Second, the research institutions and application companies are seriously out of touch. Third, the research institutions lack sufficient financial support. The cost of preparation of olefins is too high, it is difficult to achieve industrial commercial production, and the market price remains high, which limits the large-scale widespread use of graphene to some extent.

Founded in 1979, Jinan Shengquan Group was formerly one of the 156 projects supported by the former Soviet Union during the â€œFirst Five-Year Planâ€ period. The headquarters is located in the national â€œXiangâ€ brand represented by the Chinese old brand â€œRui Yuxiangâ€ silk fabric. For more than 30 years, the company has been committed to the innovative research and development and comprehensive utilization of various plant straws. Currently, it has a comprehensive utilization of biomass, three major resins and composite materials industry, and a large health industry. Four major industries, including biomedicine and new materials. The leading products such as furan resin and phenolic resin enjoy high reputation in the same industry in the world. In addition, the company is a national key enterprise of high-tech enterprises and agricultural industrialization, and is the designated manufacturer of Shenzhou spacecraft thermal insulation raw materials. On July 28, 2014, the company landed on the â€œNew Third Boardâ€. As a big man in the new three board market, the release of biomass graphene internal heating fiber will attract high attention from the capital market.

Perlite Expansion Furnace is used to expanded perlite production plant. Before entering Perlite Furnace, perlite needs to be pre-heated and dried to less than 5% moisture. Perlite Expansion Plant produced by Henan Dianyan can expand perlite to tens of times its original volume. Expanded Perlite is mainly used in refractory industry, which is a new replacement product to replace floating pearls. According to the different fuels, perlite expansion plants can be divided into natural gas perlite expansion furnaces and coal gas perlite expansion furnaces.