The several Yangxian lines of steel futures and the small price increase of some small steel mills that appeared on the 20th have made the industry hotly discuss whether the steel market has begun to break out. However, after interviewing a number of steel mills, the reporter found that the steel mills were bearish on the market outlook. They believed that this round could only be regarded as a â€œphased reboundâ€. It was not a reversal of the market. The demand in the second half of the year is still not optimistic.

Some small steel mills have recently raised prices
The steel market has fallen for three consecutive months, and the average market price of secondary rebar and hot rolled coil has fallen by more than 15%. However, there has been an upswing in the market recently. Taking hot rolling with high market sensitivity as an example, the price of hot rolled coil in Tianjin market rose by RMB 160/ton in two days. On the 20th, there was another phenomenon in which some small steel mills raised their prices slightly.

Based on the analysis of cost factors, the optimist believes that this round of steel price decline has fallen below some of the cost lines of the variety, the ex-factory price and the spot price are â€œupside downâ€, and the bottom of the market has been completed. Coupled with the recent promotion of the Ministry of Housing and Urban-Rural Development on the promotion of affordable housing construction, there is a view that the market is stabilizing and warming, and the trend of steel mills gradually raising prices has gradually become clear, and the voice of traders â€œbottoming the bottomâ€ is endless.

Steel is still in the off-season
However, after contacting a number of large steel companies in China, the reporter found that, based on the judgment of the later demand situation, the big steel mills generally expressed pessimism about this round of market.

The sales manager of the Shagang Group in Hangzhou believes that this round of market can only be said to be consolidation, and the duration will not be too long. And because the downstream demand has not improved substantially, "there may be a fall in the future."

Shagang Group is the largest construction steel manufacturer in China. In an interview with this newspaper, the person in charge of the sale said that in the previous period of the rainy season, some of the construction sites were in a state of suspension. Now that Mei is out, the price has partially rebounded and the construction site has begun to purchase goods, which has created an illusion of demand release.

At the same time, he believes that the demand for construction steel is not enough to make the industry optimistic. The high temperature and typhoon weather in August will keep building steel in the off-season.

Downstream demand has not materially improved
The analysis logic from the demand level has also been confirmed in other steel mills. An insider of a large state-owned steel enterprise in North China briefed the reporter on the current demand situation of various downstream industries. The results show that demand in the second half of the year is still not optimistic.

In terms of auto panels, the source said that it is conservatively estimated that the reduction in auto plate orders in the second half will be at least 20%. â€œIn March and April, the steel price increased and the car factory bought more, which led to the current inventory of the car factory. It is estimated that it can be digested for 2-3 months. This means that at least until the end of August, the car order may have He said that in addition to the obvious decline in the automobile plate, the overall situation of the shipbuilding board has not yet gone out of the doldrums, the new ship orders are still falling, and the abandonment phenomenon still exists objectively. Only the home appliance board is stimulated by the policy of home appliances to the countryside, the current sales situation is acceptable.

Regarding the construction steels that are hotly debated in the market, he believes that the Ministry of Housing and Urban-Rural Development said that from August 10th, it will supervise and inspect the construction of affordable housing tasks in various places, which may prompt the building materials to have a small market, but due to the current dealers. The inventory is too high, and the overall steel output continues to be excessive, and it is difficult for steel prices to perform.

JESSRO PVC pipe and  PVC fittings of BSPT thread  standard are make from super PVC materials. This kind of materials can be used for cold water under high pressure for long time. So our PVC pipe and PVC fittings are widely used in construction, water treatment ,swimming poor and water project in pisciculture. We have all the size from 1/2" to  4" in a full range items. And we can supply different color as white, dark grey, light grey and blue.


BSPT thread  standard Application: Steam, air, gas and oil pipes or for many other fluids. All of our PVC  pipe and  PVC  fittings of  Bspt Thread Standard can following your specific requirement .And we can supply you the professional service. Looking forward to the pleasure of receiving your detail inquiry! 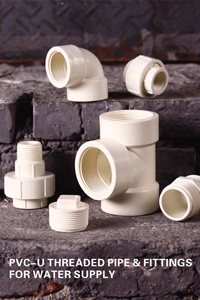